Why Most MLMs Don't Work 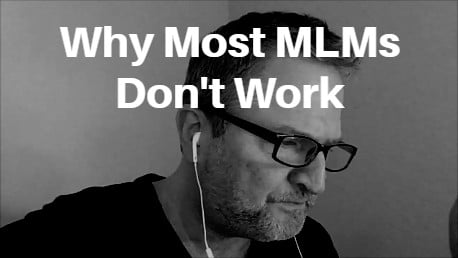 Why Most MLMs Don’t Work

In the home-based business arena, MLM (otherwise known as Multi-Level Marketing or ‘Network Marketing’) is easily the most controversial. After Amway started in the late 50’s we’ve seen an explosion of this industry that continues to this day.

With this growth there has been so much misinformation and outright lies thrown around. What (and who) should you believe? Is it a viable business model? Is it a scam?

Let me tell you what MLM is…what it isn’t, and why I don’t (for the most part) see it as a viable business model…

Why Most MLMs Don’t Work [VIDEO]

MLM is NOT a Pyramid Scheme

Let me just dispense with this drivel once and for all…

This whole ‘MLM is a Pyramid Scheme’ comment thrown out there is from people who are usually ignorant and have no idea what they are talking about.

Here is the definition of a Pyramid Scheme from Wikipedia:

A pyramid scheme (commonly known as pyramid scams) is a business model that recruits members via a promise of payments or services for enrolling others into the scheme, rather than supplying investments or sale of products or services. As recruiting multiplies, recruiting becomes quickly impossible, and most members are unable to profit; as such, pyramid schemes are unsustainable and often illegal.

Pyramid schemes have existed for at least a century in different guises. Most multi-level marketing plans fall into a sub-group of pyramid schemes.

The first part of Wikipedia’s definition is fairly accurate: bringing people in to a ‘scheme’ with the promise of payments without any real sales of products and services IS illegal. The second part… ‘Most multi-level marketing plans fall into a sub-group of pyramid schemes’ is frankly fucking ridiculous and plain wrong. Legitimate MLM’s do not operate on ‘promise of payments’ and no products sold. I can’t be any more clear than that. Wikipedia needs to modify their definition, period.

So Should You Promote an MLM?

Good question. Let me give you my blunt take on it:

I would NOT promote and represent an MLM where the pay structure pays more than 3 levels…ideally two. Why? There is simply not enough commissions to be spread around UNLESS you inflate the value of the product.

Now, let’s say you have a deep pay plan (more that 3 levels) that doesn’t inflate what you’re selling. The other major deterrent is most people will not build a deep enough group to see enough commissions. It’s very hard to do.

You many want to do it. Go for it. Me? I’d rather be paid on my own efforts.

To this day I have never seen a pay plan that is more than 3 levels that I would promote.

So You Want to Promote an MLM??

Great. Here’s what you do…

a. Promote a company with a pay plan that pays the BULK of its commissions on the first 2 levels (3 is even pushing it)
b. Promote a non-MLM program such as product licensing and/or affiliate marketing where you make the majority of commissions and promote an MLM on the side as your long-term business.

When Would I Promote an MLM?

I would need three things to consider promoting an MLM company with a deep pay plan:

I Do Love The Spirit of Multi-Level Marketing But…

The teamwork aspect of MLM has always been a huge attraction for me, as well as the possibility of creating some residual income not based on your efforts. That’s why I’m involved in a few programs that pay 2 levels.

But the ‘traditional’ model of MLM has yet to prove to me that it can work for the average distributor who is willing to work hard. The statistics bear this out.

This post is not meant to slam MLM as there are a lot of great people in the industry…and some great companies. I just see it largely as a flawed business model.

I’d love to hear your comments on this.

What the Facebook Cambridge Analytica Scandal Means for Online Marketers