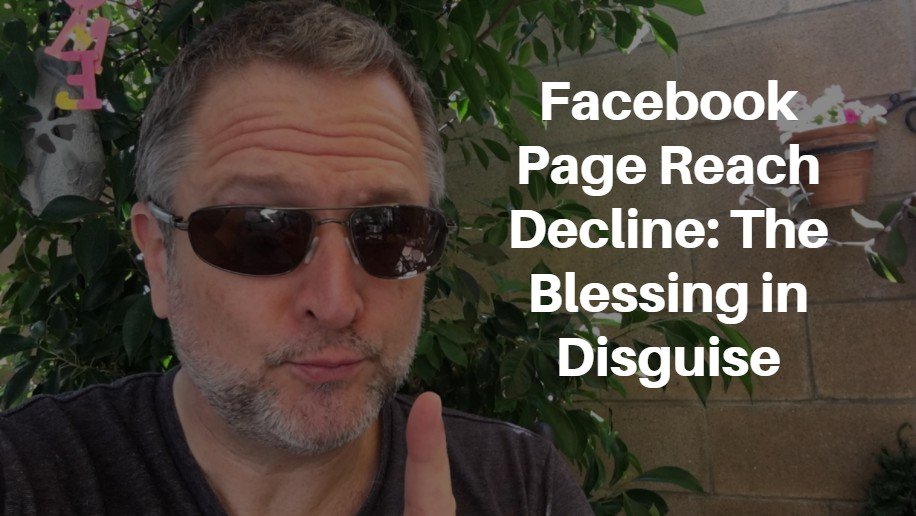 We’ve all heard moans, groans…and the whining and the bitching: ‘The Facebook Page Reach Decline has killed my page’!

It’s true. The reach on your Facebook Page has slowly declined to the point where it’s almost zero. In fact, I’ve heard numbers that suggest that Facebook’s average organic reach in 2017 is about 1% for pages on the social behemoth.

That means of all the people who ‘Liked’ your page, only 1 percent actually see your posts.

‘This is an injustice!!’ I hear you bark. ‘You’re making me pay to reach MY people’!

Yep. Except that they’re not your people. They’re Facebook’s people. It’s….Facebook’s data.

And in the words of Alec Baldwin’s character in ‘Glen Garry Glen Ross’…in that famous scene: ‘If you don’t like it, leave.’

Now we both know you’re not going to leave…and you shouldn’t. Everybody is on Facebook. The latest statistics indicate there are over 2 BILLION active users!

The Facebook Page Reach Decline: It Weeds Out the Competition

In the beginning, Facebook let your posts be seen by the majority of the people who Liked your page. This was great.

– Too many people started using the social network. So for a user that Likes a lot of pages, their feed began to be quickly flooded with posts. Facebook soon realized (or planned this in advance) that they needed an algorithm to ‘weed out’ the posts that didn’t get engagement, and to reward the pages that did.

– They also saw this as a golden opportunity to charge users to get their posts seen. Hence, one of the largest and most effective advertising platforms the world has ever seen.

Uh….yeah. They are a business.

So what can you?

Play their game. Start paying to get your posts seen.

This is not a tutorial, but here are a few tips:

– You can spend as little as 5 dollars a day to test every single piece of content you put on your page. If a post doesn’t get the engagement you like? You kill the ad.

– Connect every call to action on your posts to a page where you can collect their email address or get them in your Facebook Messenger chat list. Now you can market to them at will…and at no cost to you.

– Learn how to retarget. This means advertising to the same people who saw one of your posts or ads before. Why would you want to do that you ask?

1 – your ad costs go way down when you retarget and 2 – you want people seeing you over and over.

Learning how to do the above effectively will separate you from the 95% who bitch that no one sees their content.

Then you my friend, do not have a business.

And if you can’t spend 5 bucks a day on your ‘business’ then stay on your personal profile where you will make very little money.

This is a social ad platform now. I know most of you don’t like it.

But it is NEVER going back. Use it to your advantage while everyone else complains.

WordPress Automatic Backup: A Must for Your Blog

Who the Hell ARE YOU? [Email Marketing Tip]